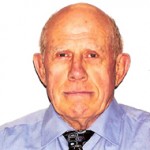 Alma Don Sorensen was born in Hyrum, Utah. After serving a mission to the New England states, he earned his BA at Utah State University and his PhD at the University of Illinois in political science. His field of study is moral and political philosophy and the philosophy of the social sciences. He taught at Indiana for six years and then came to BYU in 1970, where he taught courses in those subjects, garnering several teaching awards including an Alcuin Award. He retired in 1998 and taught occasional classes thereafter. He and his wife Necia make their home in Saint George, Utah.