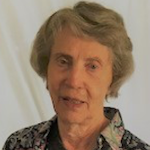 About Cherry B. Silver

Cherry Bushman Silver holds degrees in English and American literature from the University of Utah, Boston University, and Harvard. She has taught courses at BYU-Provo and colleges in Washington State and California. While serving on the General Board of the Relief Society from 1990 to 1997, she contributed chapters to Knit Together in Love: A Focus for LDS Women in the 1990s and wrote the History of the Elaine Jack Administration. For eighteen years she has focused on women’s history and has served on the executive committee of the Mormon Women’s History Initiative Team (MWHIT). With Carol Cornwall Madsen, she edited New Scholarship on Latter-day Saint Women in the Twentieth Century (2005). She is currently helping edit and annotate 47 years of diaries written by Emmeline B. Wells, editor, suffrage leader, and fifth general Relief Society president. The Wells diaries are being published online by the Church Historians Press. Cherry and her husband, Barnard Silver, served missions in Abidjan, Cote d’Ivoire, and in Kinshasa and Lubumbashi, Zaire, now the Democratic Republic of Congo. They live in Holladay, Utah, and have two children and ten grandchildren.