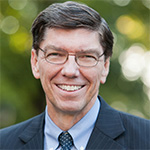 Clayton Christensen is the Kim B. Clark Professor of Business Administration at the Harvard Business School. In 2011 in a poll of thousands of executives, consultants, and business school professors, Christensen was named as the most influential business thinker in the world. He is the best-selling author of nine books and more than a hundred articles. His first book, The Innovator’s Dilemma, received the Global Business Book Award as the best business book of the year (1997); in 2011 The Economist named it as one of the six most important books about business ever written. Born in Salt Lake City, Utah, Christensen served as full-time missionary for the LDS Church in the Republic of Korea from 1971 to 1973. He has since served in many church callings, including service in the Boy Scouts of America for 25 years as a scoutmaster, cubmaster, den leader, and troop and pack committee chairman. He and his wife Christine live in Belmont, Massachusetts. They are the parents of five children and grandparents to five grandchildren.