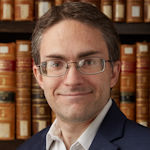 David Calabro is Curator of Eastern Christian Manuscripts at the Hill Museum and Manuscript Library at Saint John’s University. He holds a doctoral degree in Near Eastern languages and civilizations from the University of Chicago. His research deals with the languages and cultural history of the Near East. He lives in Saint Cloud, Minnesota, with his wife Ruth and seven children.