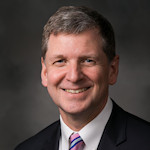 James R. Rasband is the Hugh W. Colton Professor of Law at Brigham Young University’s J. Reuben Clark Law School. He received his B.A. from Brigham Young University and his J.D. from Harvard Law School where he was an editor of the Harvard Law Review. Following law school he clerked for Judge J. Clifford Wallace on the United States Court of Appeals for the Ninth Circuit. He then practiced law at Perkins Coie in Seattle, Washington where his practice focused on Indian treaty litigation and the Endangered Species Act. He joined the BYU Law faculty in 1995 and has published a variety of articles and book chapters on public land and natural resources law topics. He is coauthor of Natural Resources Law and Policy, a groundbreaking casebook used in law schools around the country. Professor Rasband served as dean of BYU Law School from 2009–2016. Prior to his appointment as dean, he served in the university administration as the Associate Academic Vice President for Faculty. He has also served in a number of other leadership positions in professional and academic organizations and is a Fellow of the American Bar Foundation.