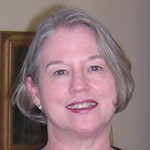 Janet Hessel Ewell (BA, BYU and MA, California State University Long Beach) is a retired educator who has written about student First Amendment rights and journalism, including as lead author of a journalism textbook. She presented at the Widtsoe Foundation’s “Sacred Space, Sacred Thread” conference on “Gamma Marks in Late Antiquity and the Early Medieval in the Jewish and Christian Contexts.” She currently serves as a ministering sister, temple worker, Gospel Doctrine teacher, and as a PathwayConnect service missionary. She and her husband David are the parents of four children and grandparents of six.