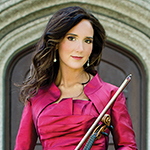 Jenny Oaks Baker is a Grammy Nominated, Billboard No. 1 performer and recording artist. She received her master of music degree from the renowned Juilliard School in New York City and her bachelor’s degree in violin performance from the Curtis Institute of Music in Philadelphia. She has performed as a soloist at Carnegie Hall, Lincoln Center, Strathmore Hall, and the Library of Congress, and as a guest soloist with the National Symphony, Jerusalem Symphony, Pittsburgh Symphony, Utah Symphony, and Mormon Tabernacle Choir. Over the years Jenny has collaborated with such luminaries as Gladys Knight, Kurt Bestor, Marvin Hamlisch, and the former Secretary of State Condoleezza Rice and has released fourteen studio albums since 1998. Jenny, her husband Matthew, and their four musical children reside in Salt Lake City, Utah.