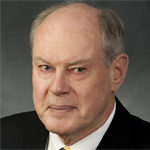 S. Kent Brown is an emeritus professor of Ancient Scripture at Brigham Young University and is the former director of the BYU Jerusalem Center for Near Eastern Studies. Brother Brown taught at BYU from 1971 to 2008. In 1978–79, he and his family spent a year in Cairo where he was a fellow of the American Research Center in Egypt while he worked on the collection of ostraca at the Coptic Museum. In 2007 and 2008, Brother Brown served as the principal investigator for an archaeological excavation in southern Oman. In the world of documentary films, he has served as the executive producer for Journey of Faith, Journey of Faith: The New World, and Messiah: Behold the Lamb of God, all productions of the Neal A. Maxwell Institute for Religious Scholarship at BYU. His most recent book is The Testimony of Luke which deals historically, culturally, and doctrinally with each verse in Luke’s Gospel and is available in hard copy and electronic-book form from BYU Studies, Deseret Book and Amazon. In Church service, he has served as president of the BYU Thirteenth Stake and president of the Jerusalem District. He is married to the former Gayle Oblad; they are the parents of five children and the grandparents of twenty-five grandchildren and two great-grandchildren.