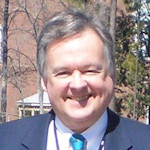 Paul C. Peterson is Distinguished Professor Emeritus in the department of politics at Coastal Carolina University in Conway, South Carolina, where he taught courses in American government and political philosophy for 34 years. He has published numerous articles, reviews, and professional papers in his teaching areas as well as related to popular culture. In 1985-86 he served as a program officer at the National Endowment for the Humanities. Peterson graduated from Brigham Young University in 1968 with a BA degree in political science and minors in economics and philosophy. The following year he received an MA in Political Science from the University of California, Riverside, and in 1980 he received his PhD in government from Claremont Graduate School in California. Now retired, Peterson lives in Provo, Utah, with his wife, Pamela Jackson Peterson.