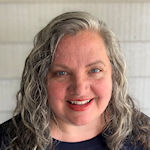 Rebecca Reynolds Lambert studied Comparative Literature and Latin at BYU, and subsequently received an MA and M.Phil. in History at Columbia University as she was studying for her PhD in Enlightenment Political Philosophy. She was awarded an Olin Fellowship, which allowed her to also earn an M.Phil. at Cambridge University in Social and Political Thought. She has spent the last few decades raising seven children in Massachusetts, where she felt fortunate to teach the entire course of Sunday School study, as well as early morning seminary for eight years. Rebecca currently works in the Addiction Recovery and ward mission programs and enjoys welcoming grandchildren into this world.