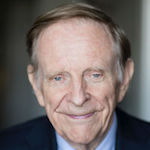 Richard Bushman was born in Salt Lake City in 1931 and brought up in Portland, Oregon. He received his undergraduate and graduate degrees from Harvard University and taught at Brigham Young University, Boston University, and the University of Delaware. He retired as Gouverneur Morris Professor of History at Columbia University in 2001 and was visiting Howard W. Hunter Chair of Mormon Studies at Claremont Graduate University from 2008 to 2011. He is the author of a number of books including Joseph Smith: Rough Stone Rolling. He served as Co-General Editor of the Joseph Smith Papers until 2012 and in 1997 founded the Mormon Scholars Foundation that fosters the development of young Latter-day Saint scholars. He is now co-director of the Center for Latter-day Saint Arts in New York City. With his wife, Claudia Bushman, he is the father of six children and twenty grandchildren. He has served as a bishop and stake president and currently is patriarch of the New York Young Single Adult Stake.