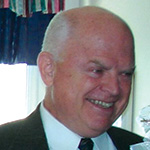 Robert F. Smith is an alumnus of BYU and has had advanced training in archeology and Near Eastern languages at the Hebrew University in Jerusalem, UCLA, and CalState University, Long Beach. He was the first editor of the FARMS Book of Mormon Critical Text Project (1979–1987), and most recently presented a paper on ”Book of Mormon Theologies: A Thumbnail Sketch” at the 2012 annual meeting of the Society  for Mormon Philosophy and Theology (SMPT). He is currently a member of Grandview Stake and a veil worker at the Provo Temple.