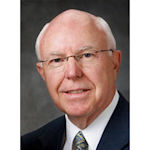 Spencer J. Condie attended Idaho State University, Brigham Young University, the University of Utah, and the University of Pittsburgh where he received a Ph.D. in medical sociology. He was a professor of sociology and ancient scripture at Brigham Young University and served as a mission president in the Austria-Vienna Mission when it included the countries of Hungary, Yugoslavia, Poland, Czechoslovakia and Greece. From 1989-2010 he served as a General Authority Seventy and then as President of the Nauvoo Temple. He and his lovely wife, Dorothea, are the parents of five children with eight grandchildren.