[Page 1]Abstract: Jeffrey R. Chadwick has previously called attention to the name ŚRYH (Seraiah/Sariah) as a Hebrew woman’s name in the Jewish community at Elephantine. Paul Y. Hoskisson, however, felt this evidence was not definitive because part of the text was missing and had to be restored. Now a more recently published ostracon from Elephantine, which contains a sure attestation of the name ŚRYH as a woman’s name without the need of restoration, satisfies Hoskisson’s call for more definitive evidence and makes it more likely that the name is correctly restored on the papyrus first noticed by Chadwick. The appearance of the name Seraiah/Sariah as a woman’s name exclusively in the Book of Mormon and at Elephantine is made even more interesting since both communities have their roots in northern Israel, ca. the eighth–seventh centuries BCE.

In 1993, Jeffrey R. Chadwick noted the appearance of the Hebrew name ŚRYH (שריה), typically rendered Seraiah in English, as a woman’s name on an Aramaic papyrus from Elephantine and dated to the fifth century BCE.1 As also pointed out by Chadwick, Nahman Avigad has argued that the Hebrew name ŚRYH(W) should be rendered as Saryah(u), rather than the usual Serayah(u) — which would make the English spelling Sariah instead of Seraiah.2 Thus, according to Chadwick, the attestation [Page 2]of ŚRYH as a Hebrew female name at Elephantine provides strong supporting evidence for the appearance of a Hebrew woman named Sariah in the Book of Mormon (1 Nephi, headnote; 2:5; 5:1, 6; 8:14).3

Paul Y. Hoskisson, however, urged caution about this evidence since the papyrus in question (Cowley-22) has a lacuna requiring restoration of both the final hē (ה) in ŚRYH and the bet- resh (בר) of the Aramaic word brt (ברת), “daughter,” which is the key indication that the individual in question is a woman.4 Thus, Hoskisson cautioned, “restorations cannot provide absolute proof but rather at best a suggestion.”5 He considered it a good sign that “other scholars accept the possible existence of this feminine name in relative temporal proximity to the beginnings of the Book of Mormon,” but Hoskisson ultimately felt “a clear-cut example of the name for a female would be more helpful.”6

Chadwick argued, however, that “the comparative context of the papyrus leaves little doubt that the reconstruction is accurate,” and it is really “the extant final t” of brt that “assures us that the person was [Page 3]a daughter, not a son.”7 In the most recently published translation and transcription of this papyrus, Bezalel Porten and Ada Yardeni would seem to agree. In their hand-drawing of the Cowley-22 papyrus (see Figure 1),8 they represented the restoration of the final hē (ה) in ŚRYH and the bet-resh (בר) of brt as being “nearly certain.”9 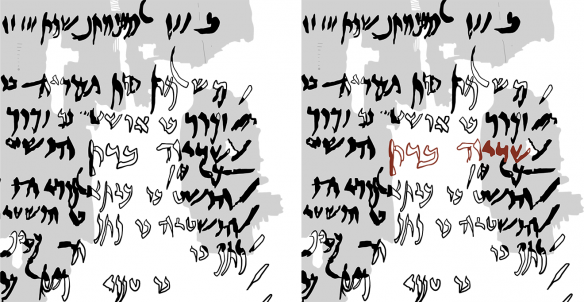 Figure 1. Left: Illustration of Cowley-22, by Jasmin G. Rappleye, based on the drawing by Ada Yardeni in Textbook of Aramaic Documents 3:227 and foldout 32. Right: Same image, with śryh brt, “Seraiah (Sariah) daughter of,” highlighted. The “hollow strokes” used to represent the restored portions indicate that the restorations are considered “nearly certain.”

Nonetheless, new evidence that completely satisfies Hoskisson’s call for a more “clear-cut” example has been found. Porten and Yardeni [Page 4]document ŚRYH as a Hebrew feminine name not once, but twice among the Aramaic documents at Elephantine.10 A list of names on an ostracon found there, dated to the second half of the fifth century BCE, includes śryh brt […] ([…]שריה ברת), “Seraiah daughter of […].”11 The name of Seraiah’s (or Sariah’s) parent is broken off, but both “Seraiah” (śryh) and “daughter” (brt) are attested in full,12 thus providing an undeniable example of ŚRYH as a female name (see Figure 2).

This would seem to meet Hoskisson’s demands for more “clear cut” evidence. Furthermore, this clear attestation of ŚRYH as a female name at Elephantine provides reassuring evidence that Cowley-22, which comes from the same period, is indeed restored correctly as “Seraiah, daughter of Hosea.”

In light of Lehi’s ancestors coming from northern Israel (1 Nephi 5:14, 16), ca. 720 bce,13 it is also interesting to note that, according to Karel van der Toorn, the Jewish community at Elephantine ultimately has its roots in northern Israel, ca. 700 bce.14 After surveying the evidence from deity names in the Aramaic texts, van der Toorn concludes, “the entire picture of the religious life at Elephantine and Syene strongly suggest that the historical core of the communities came from Northern Israel.” He [Page 5]further notes “the emigrants from Northern Israel would have entered Egypt by way of Judah” and suspects “some of them stayed in Judah for a significant length of time” before migrating to Egypt sometime in the seventh century bce.15 Therefore, the founders of the Elephantine community were likely contemporaries of Lehi or his parents and were similarly Israelites of northern stock who initially settled in Judah.

These details add to the significance of these two references to women named ŚRYH (Seraiah/Sariah) at Elephantine. In both the Hebrew Bible and the epigraphic evidence from Judah, ŚRYH(W) is only attested as a male’s name.16 While this could simply be due to the limitations of [Page 6]our available data set,17 it is also possible the attestation of ŚRYH as a woman’s name both in the Book of Mormon and at Elephantine and only in these sources, reflects a specifically northern Israelite practice. 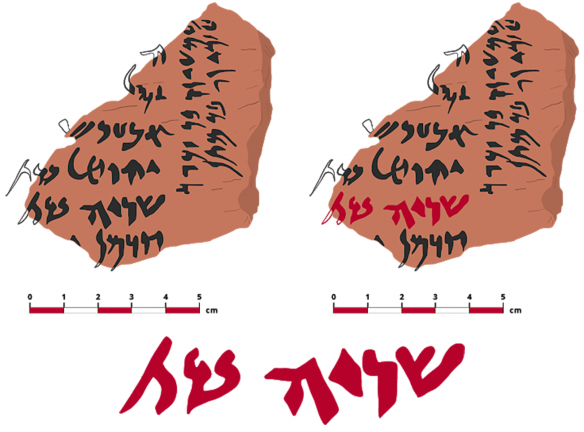 Figure 2. Top, left: Illustration of Elephantine Storeroom 2293, by Jasmin G. Rappleye, based on the drawing by Ada Yardeni in Textbook of Aramaic Documents 4:211. Top, right: Same image, with śryh brt, “Seraiah (Sariah) daughter of,” highlighted. Bottom: Detail of śryh brt from the ostracon.

In any case, with the certain reference to a woman named ŚRYH on an ostracon from Elephantine, there can no longer be any doubt that Seraiah/Sariah was a Hebrew woman’s name in the mid-first millennium bce.

Editor’s Note: Book of Mormon Central (https://bookofmormoncentral.org/) has just published a blog post and video that are directly related to this article. See them at VIDEO: New Archaeological Evidence for Sariah as a Hebrew Woman’s Name .

2. See Nahman Avigad, Hebrew Bullae From the Time of Jeremiah: Remnants of a Burnt Archive (Jerusalem: Israel Exploration Society, 1986), 46–47. It is noteworthy that although Avigad continues to follow the traditional spelling of the name as Serayah(u) when transliterating the name, in his definitive work on Hebrew seals, Avigad indexed the name under śr(r), meaning “ruler.” If this is the correct etymology of the name, then Saryah(u) is indeed the more correct spelling. See Nahman Avigad, rev. by Benjamin Sass, Corpus of West Semitic Stamp Seals (Jerusalem: Israel Academy of Sciences and Humanities, The Israel Exploration Society and the Institute of Archaeology of the Hebrew University of Jerusalem, 1997), 538.

4. See A. Cowley, ed. and trans., Aramaic Papyri of the Fifth Century BC (Oxford: Clarendon Press, 1923), 67, 71; Bezalel Porten, Archives from Elephantine: The Life of an Ancient Jewish Military Colony (Berkeley and Los Angeles: University of California Press, 1968), 320, cf. pl. 11. The female name Seraiah is also mentioned on pp. 142, 144n121; 250n31, 333 of Archives from Elephantine. In “Notes and Communications,” Chadwick was up front about the need to restore some of the text but noted that, given the context and spacing on the papyrus, the restoration of śry[h br]t was virtually certain, as evidenced by the fact that both Cowley and Porten provided this exact same restoration, which no scholars have ever questioned.

8. Based on this illustration, which is from Porten and Yardeni (see Fig. 1 caption), it looks like even most of the tav (ת) in brt is missing, which may suggest to some that this restoration is less certain than Chadwick implies. However, the context makes it virtually certain that the text had either br (רב), “son” or brt (תרב), “daughter,” and the long partial stroke that is present makes just br impossible.

9. See Bezalel Porten and Ada Yardeni, Textbook of Aramaic Documents from Ancient Egypt, 4 vols. (Jerusalem: Hebrew University, 1986–1999), 3:226–28, foldout 32, which shows “hollow strokes” for the restored portions of śry[h brt] on line 4. In the introduction, they explain: “Whenever possible, fragmentary documents have been restored, and we have been careful to distinguish between nearly certain and highly probable restorations. The former are drawn with hollow strokes; the latter with single strokes and printed with different script in the transcription and translation” (3:vi, emphasis in the original). Their transcription of this portion of line 4 is śryh [br]t, and the translation is “Seraiah [daught]er,” all in the same script, further indicating that it is a “nearly certain” restoration.

10. Bezalel Porten and Jerome A. Lund, Aramaic Documents from Egypt: A Key-Word-in-Context Concordance (Winona Lake, IN: Eisenbrauns, 2002), 416 lists C3.15.4 (= Cowley 22) and D9.14.5 (= Elephantine Storeroom 2293). Illustrations, transcriptions, and English translations of these are available in Porten and Yardeni, Textbook of Aramaic Documents, 3:226–228; 4:211. For reference, I’ve provided transcriptions and translations of the relevant excerpt of each of these texts in the appendix. Both of these attestations are mentioned briefly in the Book of Mormon Onomasticon entry for “Sariah,” but the significance of this second, certain attestation in answering Hoskisson’s previous criticism is not mentioned. Book of Mormon Onomasticon, s.v. “Sariah,” accessed February 4, 2019, https://onoma.lib.byu.edu/index.php/SARIAH.

12. The final tav (ת) in brt is partially restored, but enough of the letter is there to make it quite clear.

14. Karel van der Toorn, “Anat-Yahu, Some Other Deities, and the Jews of Elephantine,” Numen 39, no. 1 (1992): 80–101. Jared Ludlow also states that the Jews at Elephantine seem “to have had strong ties to the former northern Israelite kingdom because of its unique worship practices and reliance on Aramaic as its mother tongue.” Jared W. Ludlow, “A Tale of Three Communities: Jerusalem, Elephantine, and Lehi-Nephi,” Journal of Book of Mormon Studies 16, no. 2 (2007): 31.

15. Van der Toorn, “Anat-Yahu,” 96. Stephen Rosenberg similarly argues that the founders of the Elephantine community “originated in the former northern kingdom” based on the design and layout of their temple and dates their arrival to ca. 600 bce and suggests they were acting in “defiance of the centralizing reforms of 622 bce by Josiah, which obviously caused much dismay among the remaining peoples of the northern kingdom.” Stephen G. Rosenberg, “The Jewish Temple at Elephantine,” Near Eastern Archaeology 67, no. 1 (2004): 12. Similar arguments have been made about Lehi. See Kevin Christensen, “The Temple, the Monarchy, and Wisdom: Lehi’s World and the Scholarship of Margaret Barker,” in Glimpses of Lehi’s Jerusalem, 449–522; Neal Rappleye, “The Deuteronomist Reforms and Lehi’s Family Dynamics: A Social Context for the Rebellions of Laman and Lemuel,” Interpreter: A Journal of Mormon Scripture 16 (2015): 87–99. On the other hand, Bezalel Porten downplays the elements that van der Toorn and Rosenberg see as indicative of northern origins and suggests they came from Judah, ca. 650 bce, and were trying to escape Manasseh’s regime. Bezalel Porten, “Settlement of the Jews at Elephantine and the Arameans at Syene,” in Judah and the Judeans in the Neo-Babylonian Period, ed. Oded Lipschits and Joseph Blenkinsopp (Winona Lake, IN: Eisenbrauns, 2003), 451–470. Either way, all parties agree that the origins of the Jewish Elephantine community date to sometime between 700 and 600 bce, placing their roots very close to the setting of the Book of Mormon’s opening chapters.

17. In particular, we should be aware that women are more predominant at Elephantine, and thus more frequently named in documents from that area. Therefore, it is generally more likely that names used for women would be attested in its corpus — which may be the reason ŚRYH is found as a woman’s name there and not elsewhere. On women at Elephantine, see Annalisa Azzoni, “Women of Elephantine and Women in the Land of Israel,” in In the Shadow of Bezalel: Aramaic, Biblical, and Ancient Near Eastern Studies in Honor of Bezalel Porten, ed. Alejandro F. Botta (Boston: Brill, 2013), 3–12.

Go here to see the 17 thoughts on ““Revisiting “Sariah” at Elephantine”” or to comment on it.