Abstract: In this article Matthew Brown examines the possible meaning behind the imagery of the handclasp between God in heaven and the earthly king. He focuses on this imagery as it is articulated in Psalms 27, 41, 63, 73, and 89. He argues that Psalms 41 and 73 feasibly indicate that when the king of Israel was initiated within the precincts of the temple into the office of kingship he passed through the veil of the Holy of Holies (see Exodus 26:33) and symbolically entered into God’s presence.

[Editor’s Note: Part of our book chapter reprint series, this article is reprinted here as a service to the LDS community. Original pagination and page numbers have necessarily changed, otherwise the reprint has the same content as the original.

Psalm 89 contains multiple verses that are unquestionably linked to the temple ceremonies utilized in establishing the king of Israel in his office. In one portion of this psalm, the Lord is represented as referring to the most recognized induction rite for the Hebrew ruler; He immediately thereafter uses the imagery of a handclasp between Himself and His earthly counterpart. God says: “my servant [the king]; with my holy oil have I anointed him: With whom my hand shall be established [Page 422](kun, fastened or attached)” (Psalms 89:20–21).1 This combination of ideas seems to be a deliberate pattern, since the Lord repeats the exact same sequence of themes at a later time in the book of Isaiah: “Thus saith the Lord to his anointed [the king], whose right hand I have holden [chazaq, seized or grasped]” (Isaiah 45:1).

Figure 1. Handclasp on the Exterior of the Salt Lake Temple.

The juxtaposition of the handclasp with the anointing points to the possibility that the joining of hands was also part of the accession ceremonies. The Lord says in Psalm 89 that it is He who anoints the king, though it is clear in other texts that this was actually carried out by a priestly proxy (see 1 Samuel 16:1; 1 Kings 1:39). A ceremonial handclasp, therefore, could conceivably have been accomplished in the same manner.

One biblical commentator offers an explanation for the significance of the regal handclasp by stating that “the formula, ‘God grasps one by the hand,’ when the king ascends the throne and is inducted into the royal office, denotes the conferring of privilege and charisma on the king.”2 Another scholar is convinced that the expression “hold my right hand,” which is found in several places throughout the Psalms, is “derived from the royal ritual” of ascending the throne.3 It is interesting to note that in at least one other ancient Near Eastern culture, the enthronement of the king was known as “taking [the god] by the hand.”4

Another reference to a handclasp between the earthly king and the heavenly King is alluded to in Psalm 41, which some biblical scholars believe should be viewed in a temple context.5 The King James Version of verse 12 reads: “as for me, thou upholdest [tamak, grasp or seize or take hold of] me in mine integrity, and settest [natsab, to be stationed] [Page 423]me before thy face forever.” Mitchell Dahood retranslates this passage as a request. It is rendered as follows: “grasp me. And set me before you forever.”6 In the case of either reading, to be before the Lord is to be in His presence. And the presence of the Lord was understood by the ancient Israelites to be symbolized by His throne (the ark of the covenant) in the Holy of Holies of the temple.

A psalm that could be attributed to the king of Israel7 may also be helpful in interpreting the Psalm 41 passage. In the King James Bible, Psalm 73:23–24 reads, “I am continually with thee: thou hast holden [ahaz, grasp or seize or be fastened] me by my right hand. Thou shalt guide [nahah, lead] me with thy counsel, and afterward receive me to glory.” Again, a retranslation of this portion of the psalm forms a request: “take hold of my right hand. Into your council lead me, and with glory take me to yourself.”8 This, according to Dahood, is a reference to God’s “heavenly council.”9 It is recognized by scholars such as Moshe Weinfeld that the sixth chapter of the book of Isaiah describes a meeting of the heavenly council.10 But the important thing to notice in that passage of scripture is that the assembly is convened before the throne of the heavenly King, which is located inside the Holy of Holies of the temple. Some Bible commentators are willing to grant that it is “possible that the [Israelite] king’s coronation involved a visit to the ark” of the covenant or divine throne in the Holy of Holies, “to stand symbolically at God’s right hand.”11 Taken altogether, Psalms 41 and 73 point to the possibility that when the king of Israel was initiated into his office in the temple precincts, he passed through the veil of the Holy of Holies (see Exodus 26:33) and into God’s symbolic presence. Perhaps a proxy and a handclasp played a role in such a situation.

Psalm 63 contains themes that are firmly connected with all that has been discussed above. In this text the king of Israel speaks of God’s “sanctuary” or temple (v. 2) and how he will “lift up [his] hands” or pray12 therein (v. 4). This information logically locates the king at the altar of incense/prayer (see Revelation 8:3–4), which was situated before the veil that concealed the throne room or Holy of Holies (see Exodus 40:26). Another reference to the temple’s throne room may be detected in verse 7, where mention is made of “the shadow of [the Lord’s] wings.” Some writers have identified this as the wings of the cherubim that overshadowed the ark or divine throne inside the Holy of Holies.13 It may be significant [Page 424]that directly after this location designator is given by the king, he says to the heavenly Sovereign, “My soul followeth hard [dabaq, cleaves to or is united with or is joined fast to] after thee: thy right hand upholdeth [tamak, take hold of or grasp or seize] me” (v. 8). Thus, a proposed right-hand clasp between God and the king in Psalm 63 is adjacent to imagery that suggests an embrace, and these, in turn, seem to be connected with the veil-concealed Holy of Holies. 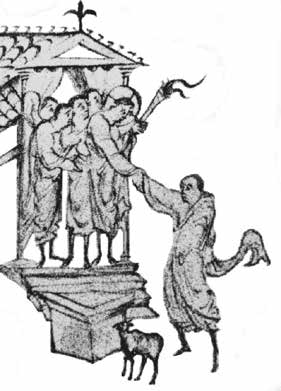 There is one final psalm that is relevant to this study. Psalm 27 represents the king as saying that he seeks to “behold” or chazah the face of the Lord in His temple. Dahood indicates that the word chazah as found in Psalms 11:7, 17:15, and 63:2 “is the verb used to describe the act of beholding God face to face.”14 In an illustration of Psalm 27 found in the Utrecht Psalter15 ― which was created about 820 ad in a Benedictine abbey near Epernay, France ― the king of Israel is shown meeting face to face with the heavenly King (and what may also be the divine council) at the parted veil of the temple. In Psalm 27:10, the king of Israel says that “the Lord will take [acaph, take in or receive into] [him] up”; in the Utrecht Psalter, the Lord is shown reaching down a stairway and grasping the king by the right hand, possibly to induct him into the heavenly assembly.

1. Another translation of Psalm 89:21 reinforces the idea that the underlying Hebrew text is talking about a handclasp. It reads: “My [i.e., the Lord’s] hand shall hold him [i.e., the king] fast” (John H. Eaton, The Psalms: A Historical and Spiritual Commentary with an Introduction and New Translation [London, England: T&T Clark, 2003], 317).

7. Psalm 73 is labeled in the King James Version as “A Psalm of Asaph.” But 1 Chronicles 16:4–7 makes it clear that Asaph was the man in charge of the Levitical temple musicians and King David would deliver his psalms to Asaph in order for them to be performed in the liturgy.

Go here to see the one thought on ““The Handclasp, the Temple, and the King”” or to comment on it.