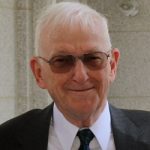 Louis Midgley (Ph.D. Brown University) is an emeritus professor of political science at Brigham Young University, where he taught the history of political philosophy, which includes efforts of Christian churchmen and theologians to identify, explain, understand and cope with the evils in this world. Dr. Midgley has therefore had an abiding interest in both dogmatic and systematic theology, and the alternatives to both. His doctoral dissertation was on the religious socialist political ideology of Paul Tillich, a once famous German American Protestant theologian, most famous for his systematic theology which is a radical elaboration of classical theism. Dr. Midgley’s encounter with the writings of Leo Strauss, an influential Jewish philosopher/intellectual historian drew his attention to the radical challenge posed by what is often called modernity to both the wisdom of Jerusalem, which is grounded on divine revelation, and also the contrasting, competing wisdom of Athens, which was fashioned by unaided human reason. Dr. Midgley has an interest in the ways in which communities of faith have responded to the challenges posed by modernity to faith in God grounded on divine special revelation.